Coping With Creeps: Concrete Action You Can Take 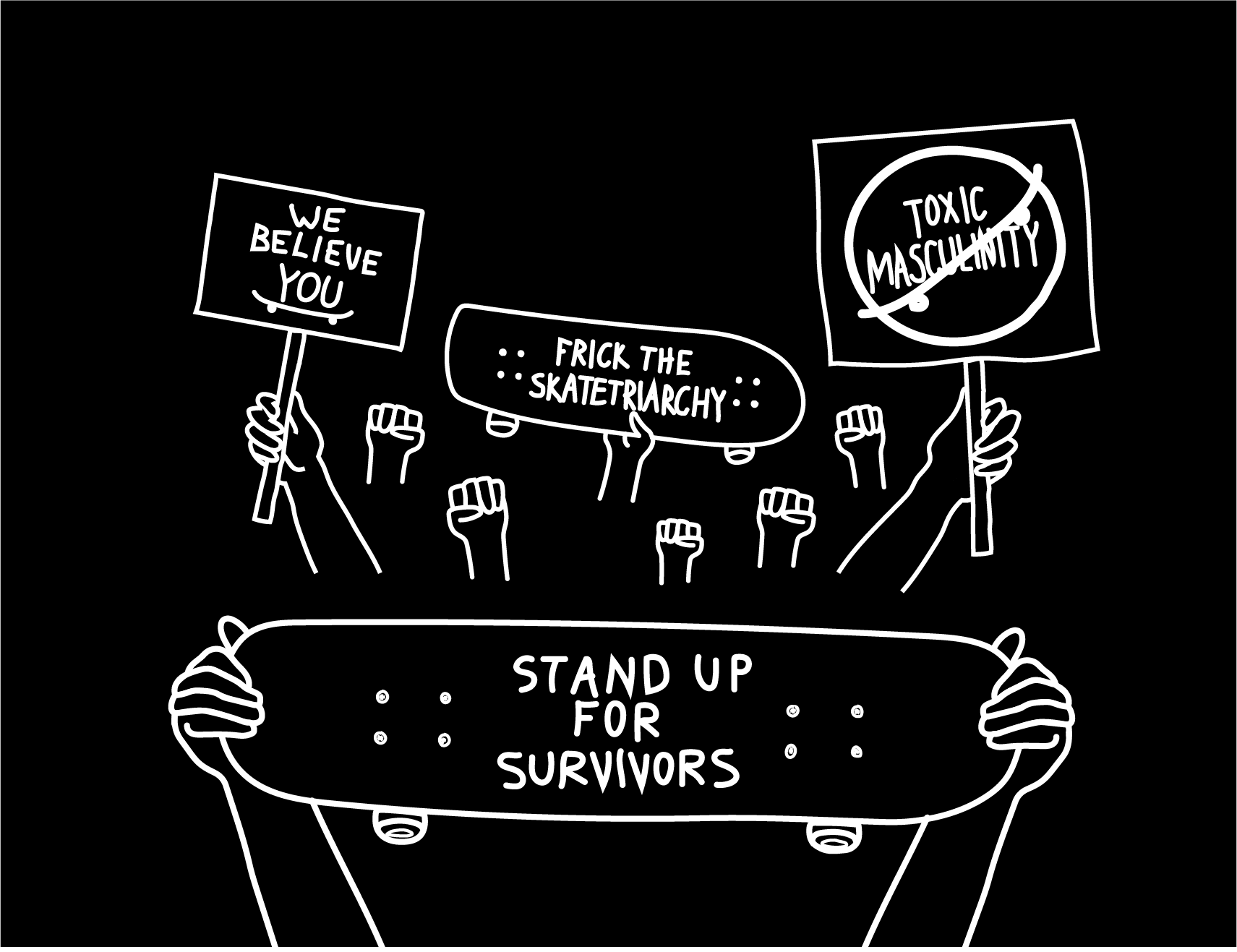 Skateboarding, we need to talk

On October 11th 2018, nearly one year ago, one of the most influential and powerful men in skateboarding, Neal Hendrix, was criminally indicted as a rapist and pedophile by professional skateboarder, Julz Lynn Kindstrand Nelson. Julz’s testimony cited years of abuse and manipulation from Neal, starting at age 14. In the wake of the scandal, Neal’s career dissolved. His appearances as a professional commentator, judge, and sponsored skateboarder vanished overnight. Julz received her fair share of allies as well as antagonists, and clearly did not have an easy time sharing her truth with the world. Nearly 11 months after bringing charges against Neal, the DA dropped the case citing that “the case could not be proven beyond a reasonable doubt.”

There it was; Our dysfunctional skateboarding family experienced our first large-scale taste of the global #metoo movement, and it was harsh. Regardless of how anyone felt about this situation, nothing felt good at all. In the wake, the only thing that is clear that we need to work to unpack the culture that allowed the possibility of this type of abusive behavior. What have we learned from this and how can we prevent this tragedy?

What have we learned from this and how can we prevent this tragedy?

Skateboarding is not exempt from societal pressures of rape culture, and it’s large male dominance further sets up imbalances of power which benefit men. Therefore, as a community, we must really seek out the truth when it comes to abuse, as we are incredibly susceptible to bias towards men.

It’s rare that abusers are caught in the act. More often, they’re caught breaking or manipulating rules. They start small – giving gifts, specific attention, and/or special treatment. In the letter published by Julz, she listed many privileges Neal gave her, such as giving her his cell phone number and granting her free access to Woodward. In her testimony, she goes on to explain that bigger lines got crossed over time. He allegedly started picking her up from church without her family knowing to molest her in his home. Progression of rule breaking, like what is outlined in Kinstrand’s story, is a repeated theme in stories of sexual abuse; little sketchy behaviors lead to big sketchy behaviors.

It’s also rare that survivors come forward, and it’s even more rare that they lie about it when they do so. We need to address the apologists who questioned the story between Julz and Neal as being a horrific publicity stunt or conspiracy. To explain this further, let’s talk about bets. In this world, there are safe bets and there are risky bets. How do you figure out which bets are safe and which ones are risky? Luckily there are statistics from the National Sexual Violence Resource Center to help you put your chips on the right color.

-88% of all instances of child sexual abuse go completely unreported

A more complex factor is understanding the social barriers and constructs that prevent victims from ever coming forward at all. This includes common misunderstandings of what rape is, a victim’s fear of alienation from their community, and the years it can take a victim to even come to terms with what has happened to them. These factors are not easily compressed into numbers or statistics but nevertheless important to consider. What does this tell you? Being the prudent gambler you are, if allegations ever see the light of day, you know that they’re very likely to be true.

PART 2: IT IS PRETTY EASY TO AVOID RAPE ALLEGATIONS

Just to make sure we are on the same page, here’s a bold statement: it’s pretty easy to avoid getting accused of raping someone. That is, as long as you follow typical child abuse prevention guidelines widely known as “best practice” by schools, churches, youth centers, and the like. For starters, most youth-serving organizations require their staff to avoid close relationships with children, never be one-on-one with a child, and keep their personal and professional lives separate. One additional guideline that seems pretty fucking obvious is not hanging out with convicted rapist. In the case of Neal, he decided it would be a good idea to bring Brian Patch to Woodward after Brian pled guilty and was convicted of unlawful sex with a person under 16. Yes, Neal Hendrix brought a registered sex offender to a camp for children.

Yes, Neal Hendrix brought a registered sex offender to a camp for children.

Great, now that we have the basics covered – let’s get down to the main point; The problem we have here is systematic. What we are dealing with is so much larger than one isolated incident, one lone woman’s story, or one shitty dude. There is an existing culture that benefits men in power over everyone else, which tees up situations like these to keep happening over and over.  To unpack this and relate it to your own life, ask yourself the following questions:

1. Could women in your circle of friends have been assaulted in the past, or currently be experiencing assault? How would you know?

2. Have you made it clear to people in your life that you would have their backs 100% if they came to you with their truth about being abused, even if the perpetrator was someone you idolize?

3. Do you know of any people that make sketchy statements, post questionable stuff on social media, or give you a creepy vibe? If yes, have you ever approached them about their behavior?

4. Think of someone you look up to. Are you willing to accept that that person could be capable of doing something as horrific as abusing someone?

After thinking through these questions, you may or may not have had an existential crisis. You’ve realized that if someone close to you was abused, it would be very difficult for them to come forward. If your friend was a rapist, it would be super hard for you to call them out. If you are a survivor yourself, you may realize that these are some of the underlying reasons behind your silence. If you’ve spoken up about your trauma, this is why it was so damn hard. The hashtag lately as been #metoo but it’s clear that it must be #all-in if we ever want things to change.

The hashtag lately as been #metoo but it’s clear that it must be #all-in if we ever want things to change.

Here are some concrete ways you can start to react and respond to rape culture:

1. Abuse against women is a human rights issue not just a women’s issue. We need to value women as human beings first and foremost.

Men, consider discontinuing the practice of stating that you care because you are “a father of a daughter” or “a husband of a wife” or “a brother of a sister”. A survivor of sexual abuse is always “somebody’s someone”. Start affirming that you support women because it’s the right thing to do and not because you “have” one or two of them in your life that you “protect”.

2. We must separate the individual from the behavior and acknowledge that human beings are complex.

Just because you know someone or look up to them, doesn’t mean they can be immediately absolved of responsibility. Let’s stop hero worship.

3. Lastly, we must stay vigilant, especially as it concerns women and children, as they are historically the most vulnerable.

Remind those around you that you’ve got their back. Listen to your gut when you think someone is acting sketchy towards you or other people around you. Ask questions and lean in.

At this point, if you still don’t know what to think, try to look at the big picture. Let’s think beyond the statistics, beyond our personal relationships, and beyond how we feel about it. What’s truly terrifying about these allegations against Neal is not whether or not they are true, it’s that they totally could be.

We, as a skateboarding community, have set up a system that makes it easy for abusers to prey on children.

The dream for so many young skaters and their parents, is to be swooped up by a major skateboarding company, get paid, and tour the world like some sort of rockstar orphan amongst grown men. The partying and adult situations presented to children in skateboarding are akin to hazing rituals where the “cool kids” are rewarded for their allegiance. Regardless of their gender of the kids, by perpetuating the status quo, we are enabling abuse to happen to up-and-coming skaters.

If we don’t want any more abusers in skateboarding, we need to start today. We must create a culture where the most vulnerable people in our community feel comfortable speaking to their experience, limit opportunities for perpetrators to affect the people we love, and abuse is not swept under the ramp. 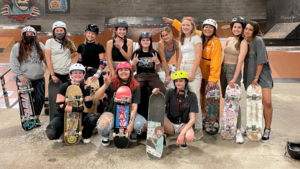 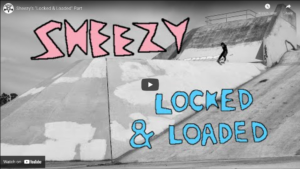 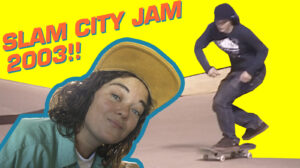 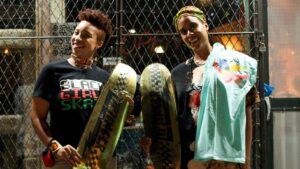 NOLA SKATERS CIRCLE UP TO SUPPORT THE BAYOU