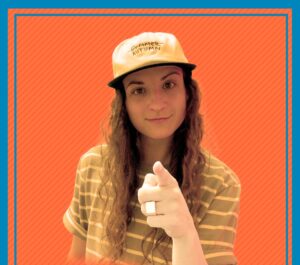 Old Fashioned Standards is exactly what it sounds like: a brand forged by genuine hard work and grit. Ultra high quality clothing created with the homies & sustainability in mind, an in-demand lane of the clothing industry. Each stitch, pattern, and detail that goes into a piece of clothing produced by OFS is handmade by owner and founder, Kassy Bailey. A Vancouver OG skater, Kassy is dedicated to sourcing unique materials and customizing the proper sizing of her products, which are designed to last generations like pieces she inherited from her grandfather. I had the fortunate opportunity to hop on the phone with Kassy and gain some more insight into the magic that is OFS and a peek into the diverse array of tricks in her bread basket. One thing we established; the pockets of Kassy’s “Raw Dawg Baguette” pants are made to fit WAY more than one chapstick.

The “Raw Dawg Baguette“ pants are so dope! What inspired the pant, and how did you come up with the name?

Thanks so much! Well I went with the name Baguettes because it is gender neutral and still has the word “baggy”. Once you get to know them I feel like it is kind of self explanatory, haha. They were created out of necessity basically, seeing so many friends cinch up huge pants at the waist to get the bagginess they wanted in the leg, but then having so much excess fabric at the top. I had a couple conversations with Una [Farrar] about how I could make her the perfect pant and from there, made it a universal product anyone can order in any size.

Remember those “girl pants“ with the really small pockets? Like chapstick size? How many chapsticks can fit in the front pocket of the Baguette?

Haha yeah I fucking haaaaated those, like actually so rude. This sounds like a good infomercial. Quick math, I’m guessing you could fit 50 sticks in each pocket. Times that by 6 that’s a whopping 300. Way more sticks than is worth spending that money on hahaha. Literally a pair of baguettes would be cheaper than how many chapstick you would have to buy to fill up the pockets.

Migzy first met you when you with Nugget, what’s your favorite Nugget story?

HA! OMG theres are a few. I would have to say it’s a story Alison’s dad Lou told me from when she was a tiny kid. Maybe 5 years old? They were driving up the “Sea to Sky” on the way to Whistler, and got stopped in bumper-to-bumper traffic. She decided to rip off all her clothes, break out of the car and start running down the highway. Lou had to get out and chase her down- it was a huge scene. I feel like the cops were called, but I might need to fact check that. It is too hilarious the way her dad tells it.

We chatted  briefly about your boxing club.  What happened? Too much Fight Club?

Oh yeah haha. Awe, I love boxing. It’s still one of my favorite things to do when I get to. Nothing lets the rage out like boxing. Essentially what happened was I went flat track racing up in Pemberton, and a gear in my motor exploded and seized the bike up and torked it into flipping with me on it, and I fucking smashed my collar bone and brain. It was buck. I puked and slept for 20 hours a day for the next few weeks and it took me a long ass time to recover. With that being my 5th knockout concussion (not boxing related) my doctor was like no more getting hit in the head. And as pissed as my 90 year old coach was, he basically was like ‘you’re done, but you’re gonna keep coming down and helping out when you’re healed up.’ Terry is the most OG boxing coach in Canada. He took some of the first people to the Olympics in the 70’s. Total badass. And a total hard ass. He’s a GOAT for sure. Once the gym opens back up I’m gonna get going back down there and help out on pads again.

What are your go-to background jams/album while in the studio?

Well I normally listen to playlists or podcasts all day. It’s a hell of a lot of Meghan Thee Stallion and Cardi B, Da Brat, Foxy Brown, Doja Cat, MC Lyte, Eve, Beyonce- all the queens. I really like Reaggaton too.

Your love for skateboarding is strong, but what do you love the most about it?

I love the community and friendship it brings. I love how empowering it can make you feel. I love the places it can take you, and the people you meet because of it. It is a fun outlet for me and has been there in the good and bad times since I was a wee tot.

The mountains, ocean and lakes. Summer is the best thing ever. Friends.

What are your thoughts on the Olympics and the state of non-trad skateboarding these days?

Hmmm I dunno, I guess we will see how it ends up being represented as a whole, and how the female and non-binary skaters are treated ultimately? I can see how it can benefit but also hinder skateboarding. I played sports growing up but never viewed skating as one, more like a way of life. So it will be interesting to see what happens in those aspects. Time will tell.

Is it all stitches and seams or do you have art projects outside of work?

Honestly, I wish. I work so damn much that when I am off work, especially if it’s summer, all I wanna do is meet up with friends and skate, swim, ride bikes, camp and adventure. Projects that i do get around to are usually fixing all my broken shit, bicycles and motorbikes LOL.

You got a clip in Maximum Flow!! Were you able to skate with the homies a lot or did you have a short time frame to film that?

I wish I had gotten to skate with them more but I only ended up meeting up that one time. When I got there, that was the spot they were checking, and I guess something about it looked fun. I got lucky.

Your clothing seems to cater to the more gender neutral side of fashion, what makes you lean toward the more non-trad community?

Just the way I grew up skating and doing what I liked. I was always pushing against gender norms, and roles. I hated the shit. I just remember thinking that it’s so lame and limiting that society only has one idea of how a women are supposed to be and act. I grew up in a small town so the scope was very small, but I always stayed authentically true to myself. Cut to many years later, OFS is an extension of me so the style follows suit. I lean more towards the non-traditional world because it is super under catered-to in the skateboard and fashion industries, and is an amazing community that many of my friends are part of. I think when it comes to expressing yourself on and off a skateboard, fashion and style go hand-in-hand. Both play a huge role. If you look good, feel good, and have confidence, you can do anything. Everyone should have access to that.

The jewelry photo shoot with your bro in law was amazing. What sparked that collab?

Thank you! Yeah it turned out so good and all people involved were family and friends and I feel like that spoke volumes and is reflected in the images. Julio and I  had been talking about it for a bit, and we both had things coming up that we needed to do a shoot for. So we combined forces to create an authentic and badass fall/winter shoot that compliments each other’s craftsmanship beautifully. His jewelry is sooooo friggen beautiful, unique, and badass. Check it out. @juliocuellarjewelry

What was the last thing to make you laugh really hard?

Haha my nieces! I just went home for the weekend to see my family for the first time in a really long time and they are 3.5 and 1.5 years old, and so hilarious.

What do you want people to know about OFS?

Everything is made for a good time, and handmade to last a lifetime, with sustainability, ethically sourced materials, and human rights at the forefront. Big Love. ◆ 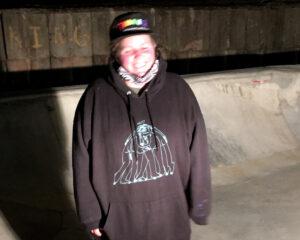 CREATIVE LINES AND LOUD GRINDS – LEON C. IS MAKING MAGIC IN THE MIDWEST 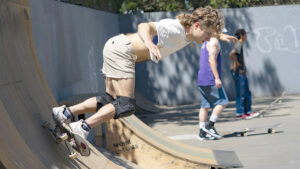 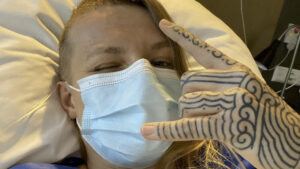