Bridge to Skate and  Girl Is Not a 4 Letter Word hosted a skate night at the Volcom HQ park last night, where the kids were invited to come down and skate, eat snacks and get a whole bunch of cool free stuff. That’s it. Come skate this killer private park and in return we will shower you in gifts. Oh also, we’re going to invite Olympic high flyer Minna Stess to come hang, and GOAT Ricci Tres will be there too, ripping the park and killing it on the mic. Say whaaatt??

It was rad. And also wtf, these kids really lucked out! In retrospect, the 90s sucked. 237,000 viewers who watched it all go down on Volcom Twitch agree.

But all the good vibes and gift bags were part of the important work of growing this unique skateboarding community and GN4LW and Bridge to Skate are two radical local orgs run by women who bring it. Cindy Whitehead is a skateboarding legend and hall of famer who rode California’s first wave of public parks in the 1980s and- fast forward a few decades– is still giving back and creating golden memories. I find out more about Cindy’s deep contributions every day. Many of her team members were in the house and wow, you’re going to hear a lot about these young skate rats in the near future. They’re super talented and Cindy is a one-of-a-kind advocate. From helping raise the (often crazy) travel costs required for them to compete, to installing ramps in their backyards, she’s sharing her long-time love for skateboarding with the new generation in a major way.

Bridge to Skate also does life-changing work, hosting amazing clinics for underserved youth in the LA-area, often their first skateboarding experience. The kids aren’t even required to BYO boards because Chantelle provides them, and they also get snacks! Serious hook ups.

Many thanks to everyone involved.  -Migzy

Learn more about these fine organizations! 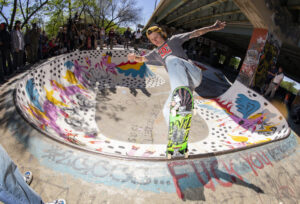 Loveletter To LGBTQ+ aka “Queerness in Skateboarding” 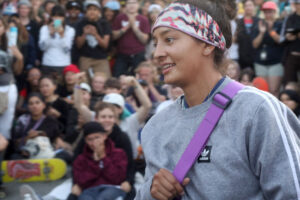